It's 12x36, 4 colors printed on blue Mohawk 80# cover, run of 130. The contributing artists were tasked with portraying an emotional connection with the video game their piece was inspired by. I chose the time I was most frustrated playing a video game, the underwater level in the Teenage Mutant Ninja Turtles game on the NES. 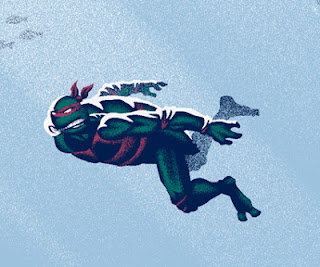 The Ninja Turtles hold a special place in my heart, as they are really what got me drawing. I'd wake up early and watch the cartoon every morning before heading out to school where I'd endlessly draw them at school. I was so enamored, that I wanted an NES solely to play the Ninja Turtles video game, believing it was based on the the 4-player game in the arcades at the time... it wasn't. But far from being disappointed, I was ecstatic when my Mom bought me the game and I would torture myself for hours, swimming around hunting for bombs and being killed by pink seaweed, like so(skip forward to around two minutes in):


But such was my love for the Turtles, I'd keep coming back to play and just die over and over with no way to save my progress, so if I ever did beat the dam level and had to turn the system off for whatever reason, I'd have to go back and play through it again, argh! 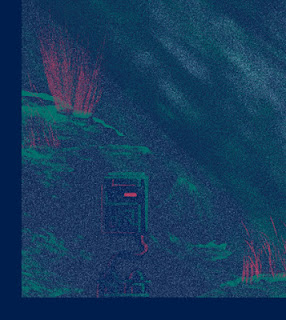 Eventually, the game I thought I was getting initially, the one actually based on the arcade game, came out and I unwrapped it on Christmas morning. Needless to say, I played the hell out of it... but, it didn't knock the first Turtles game out of my roster. I'd still play the first game and I would still die about 90% of the time on the dam level.


The iam8bit Entertainment System exhibition will take place at the iam8bit Gallery in Echo Park, Los Angeles. The show opens Friday, June 7 at 7 p.m. and will run through June 30.
Posted by Mark Englert at 8:32 PM