My latest print, which will be a 24 hour, timed release starting tomorrow at 10am PST over at Dark Ink Art. It's titled "Springfield Gorge" and is based on The Simpsons, season 2 episode, "Bart the Daredevil".

The first step was to get the general idea approved. I did a quick pencil sketch of what I had in mind, and I wound up pretty much following it exactly. I knew I wanted Homer jumping the gorge, and for him to be as small as possible so I could focus on the beauty of the landscape.

I scanned the pencils in and did a quick color pass, just to make sure I could pull this off without using too many colors. I also wanted to give the general vibe of the piece. After the pencil and color sketches were approved, I moved on to what I knew would be the next point of contention. Drawing a small Homer, with a limited number of colors to work with and staying on model. 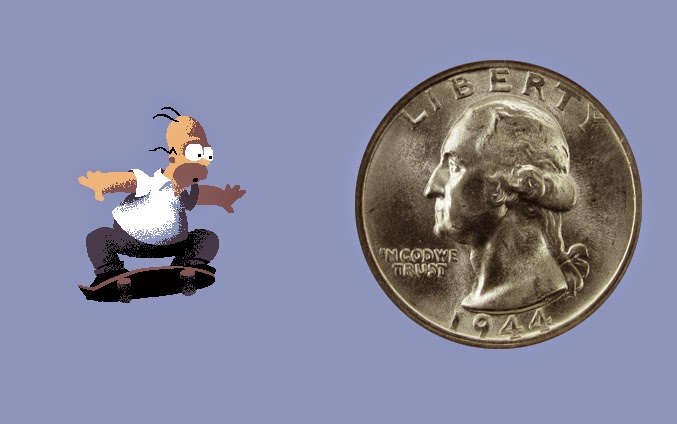 I drew this out in pencil first, scanned it and shrunk it down the size I needed. I initially went with a more worried pose, which I later changed to triumphant. The colors are all from the color sketch and I knew that I could use them to build the rest of the image. I included the quarter for an easy size comparison and sent this off for approval.

Once I started building the pieces of the image, I realized it would be funnier, as well as just more pleasing to look at in general, if I went for an inspirational vibe. Homer at the crest of his arc through the sky, convinced he is going to land this amazing jump. Extreme optimism in the face of embarrassing, painful failure is a favorite theme of mine, so I decided to pursue that as I moved forward with this piece.

Here, I have all the foreground elements in place. I had done a pass on the clouds as I had them in the initial sketch, but, a beautiful sunset I saw driving home one day inspired me to ditch those and start over. I really wanted this to feel like some inspirational poster you'd see hanging in an unemployment office with "Reach for your dreams" printed in big type underneath it and I felt like beautiful clouds, almost as if the heavens were pushing Homer towards his victory, were my ticket to conveying that feeling.

I was a bit worried that I was maybe a bit too effective with the uplifting vibe, so, before I sent this off for final approvals, I wanted to diagram out Homer's trajectory so there wasn't any question that the image was holding true to the source material. I sent this along with the final and it was good to go!

I'm stoked that I got to do this poster. If I have my way, I'll get to do some more focused on different episodes. It'll probably depend on how this first one does, so, be sure to grab one if there's another episode you'd want a poster of!

And another thing! How come I can't get no Tang around here?
Posted by Mark Englert at 6:36 PM