Should We Take a Look Inside?

My latest print, "should we take a look inside?" is 12x36, 7 colors, printed on black paper and it even glows in the dark!

This poster is a 24 hour timed release through Bottleneck Gallery in collaboration with Acme and FOX for Alien Day, 4/26, starting at noon EST! The edition size will be determined by the number of posters ordered in that time period. You can buy one here!

There's also a limited edition variant, with a run of 225 and a green color scheme, also on sale today:

In honor of Alien Day, I wrote up a little something about my first exposure to the Alien franchise. The first of the movies I saw was Alien 3, in theaters with my Dad... but I was hooked on Alien years before 3 was released. 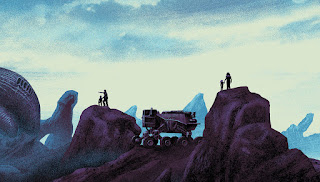 I’m pretty sure the year was 1988. I'm 8 years old and my father has taken me along on another museum visit. It was a regular activity for us, some weekends we’d even museum hop from The Los Angeles County Museum of Art to The Norton Simon Museum if they both had something interesting on display. What was unusual about the outing, this time to an exhibit about movie magic special effects at The Museum of Science and Industry in Downtown LA, was that upon entering I was greeted with a little TV on the floor, blaring the phrase, “Get away from her, you bitch!”

Aside from the out of place vulgarity, I was captivated by the images on the small screen. The scene was terrifying, a tough looking lady in a robot suit traded blows with what looked like a giant spider-dinosaur. I couldn't focus on anything else until the giant black bug got sucked out of the airlock into the black void of space and the clip ended. When I looked up from the tiny television, I saw my horror made flesh. Both the full size Alien Queen puppet and the Power Loader props were towering over me, frozen in eternal combat, a clothed mannequin in place of Ripley. I stood in awe, enraptured for what seemed like hours, but it was probably just a good ten minutes before my Dad and I made our way through the rest of the exhibit, left to grab some dinner at Crocodile Cafe then made our way home. 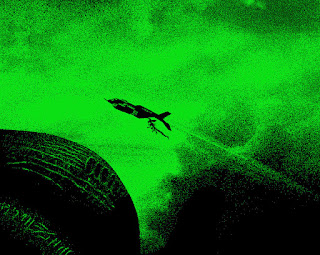 I feel like some part of me is still standing there, looking up in terror-stricken astonishment.
Posted by Mark Englert at 7:23 AM