My newest print, "don't let it pull to the left" has been debuted by the Bottleneck Gallery. These will go on sale at the gallery tomorrow, and online sometime Saturday.

I figured I'd share a small portion of the process... First up is the initial sketch: 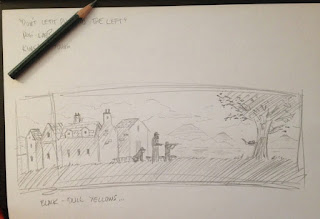 I don't always nail the composition in the sketch, but this one wound up being pretty dang close to the final product.

Next up, I drew the figures in the foreground in photoshop using a tablet. I was still in the middle of moving and didn't have my scanner hooked up, otherwise I probably would have drawn them on paper; 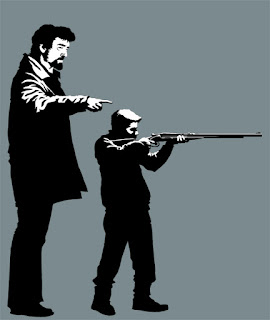 I actually found ref for the gun online, you can even buy one and I'm actually tempted to, it's a beauty.  I also remembered that Albert Finney did an album and the cover had him with a beard when he was younger. So, I looked that up for reference.

Next up was drawing the Manor, which took quite a while. I found a set picture online and drew from that. The picture is tiny so I had to start from scratch.

I basically treat it as if I was coloring a background in a comic book. So, basically, cut out shapes and render away. I started with the roof, which I just kind of loosely roughed in, using a modified brick texture I made somewhere along the way. 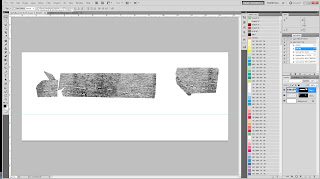 Then I frame up the place. This step takes awhile and it is a lot of figuring out my proportions and getting those right: 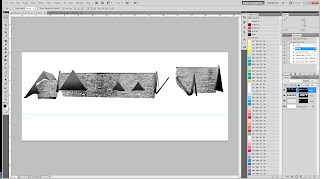 Next step, making the walls. I have a couple of stone wall textures that I used here, but they are really flat. So, the whole way along I'm making shading decisions and drawing in shadows with a regular old airbrush: 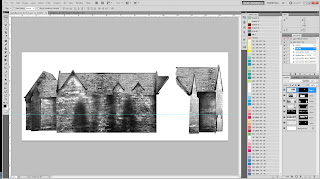 Now that I have a solid building, I can just start dropping in the detail stuff. Chimneys, windows, pipes and so on. 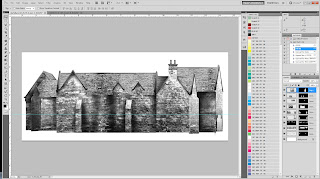 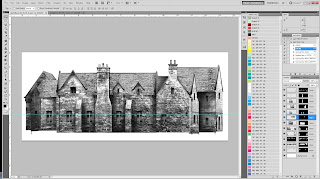 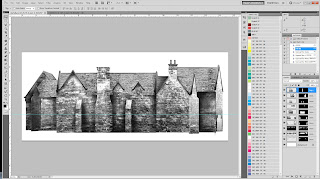 Here's a close up the final so you can see how nice and hi-rez it is: 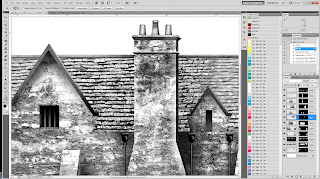 I didn't stop and take any screenshots while I put the background together. It was basically eight pictures taken locally. I live in Lake Arrowhead, CA and if you Google image search the area, you'll get a good idea of the material I have to work with here. I'll chronicle that process in another blog post down the line. Although, it really isn't too different from putting the house together... cut out shapes, apply textures, paint over the textures. Then there is a lot of fiddling around and trying to make the composition as strong as possible.

There's also the whole process of choosing colors, which I agonize over, and then the very boring and technical process of actually making a separated file that can be screen printed. If people care enough, I could also chronicle that process at some point.

Then the file goes off for printing. I've had the pleasure of working with a lot of printers over the course of the year, but my first choice is always Martin Hammond. Here's a picture of it being printed, the first three colors are done and black is about to pulled: 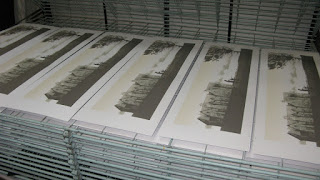 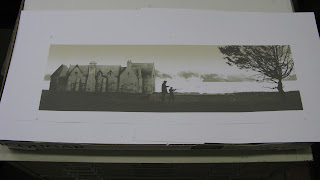 I don't have my copies yet, or pictures of the final, but knowing Marty's track record, it will look spectacular.

I hope this has shed a bit of light on how I work... most of the real work for me is nailing the idea. The most fun and/or frustrating part is the actual execution.
Posted by Mark Englert at 7:21 PM