"now we're gonna have some fun around here"...

...was George Carlin's answer to what he thought God would say when he arrives at the Pearly Gates, it is also the title to my tribute print: 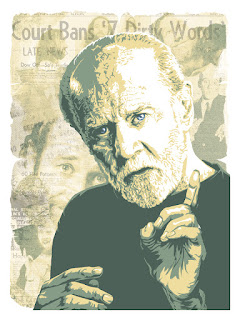 I grew up listening to Carlin, my dad handed me my first stand up comedy CD, a 2-disc collection called Classic Gold with one condition, "Don't tell your Mother." Thus, began the shaping of my sense of humor and the foundation of a world view that holds true to this day. 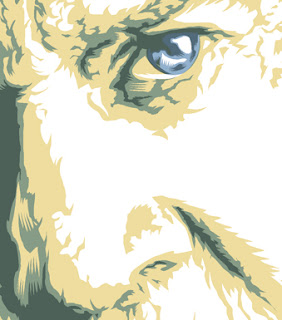 I bought every CD the day it came out, and then the books, the audiobooks, bought every movie he appeared in(even Outrageous Fortune), taped every episode of The George Carlin Show on VHS, editing out the commercials as I watched and hung the Incomplete List of Impolite Words poster in the kitchen so I could have a chuckle while I wash the dishes. 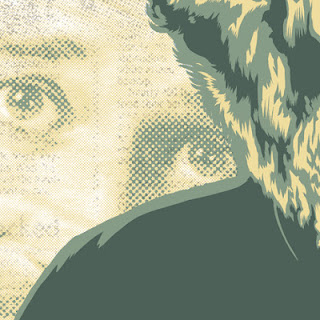 My favorite memory of seeing him live was one of the times I saw him in Vegas. Vegas is where he would work out a new act, trying out new bits, new timing, changing the order of things to see if it works better. I'd try to go a few nights in a row, because it would be different each time. During one of the last Vegas show I went to, Carlin was working out his bit on "autoerotic asphyxia" and it was dead quiet in the theater. Granted, it is a really dark bit and the audience seemed to made up of a lot of older people who had probably only ever heard "seven words you can never say on television". Also, this version of it was a much more dry, slow take than what wound up being on Life is Worth Losing. It was still hilarious though, especially with it being the first time I had heard the material, so I was laughing fairly loud... it was so quiet in the theater, that my laughs were echoing and I could see George trying to pinpoint where the laughs were coming from. About halfway through the bit, he stopped, pointed to his left and said, "These are the jokes people, this guy gets it. Try to keep up."

(He finished the bit and promptly switched gears into "Advertising Lullaby" to get the audience back.)
I've wanted a Carlin print to hang up for quite a while now. I cherish the Richard Pryor by Ken Taylor screen print I have hanging up and I've purposely left an empty space for a Carlin to hang up beside it. I felt like I had waited long enough and finally took matters into my own hands.

I'd love to be able to sell copies so other fans could have the pleasure of hanging one up as well... licensing issues are the only thing holding me up at the moment. At least social media has provided an outlet for some of George's biggest fans to see and appreciate my tribute... if nothing else comes of it, their appreciation has made my life brighter. 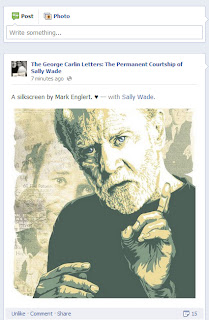 George Carlin means a lot to me and continues to influence my daily life. He helped me laugh through some very hard times and I am so damn thankful my Dad bought me that CD so many years ago. This print is my tribute to my hero, I hope that one day I'll get to share that tribute with other people whose lives have been forever altered for the better by George... we miss you.
Posted by Mark Englert at 4:44 AM